The film (movie) non-disclosure agreement (NDA) is for use when sharing an original film concept, storyline, or screenplay. The film materials that you seek to protect must be confidential information — that is, they should have only been disclosed to people bound to maintain its secrecy. If you have disclosed your film concept without requiring secrecy, for example to actors or a producer, you will have a more difficult time enforcing this NDA. There are three other requirements to protect a film concept: your idea must be novel and original; your idea must have been solicited, and the purpose of disclosing your idea is to generate revenue. If you wish to use this NDA for some other audiovisual format, substitute the type of media (TV Show, Documentary, Music Video, etc.) for the term “Film.”

The Agreement is intended to prevent the unauthorized disclosure of Confidential Information (as defined below) regarding the film concept of Disclosing Party (the “Film Concept”). The parties acknowledge that Receiving Party has solicited the Film Concept with the potential of financial exploitation.

“Confidential Information” is proprietary information relating to the Film Concept including but not limited to: story boards, synopsis, summary, screenplay, story, pitch, financial analysis, marketing plans, or other information conveyed in writing or in discussion that is indicated to be confidential.

This Agreement does not constitute a grant or an intention or commitment to grant any right, title or interest in the Film Concept or the Confidential Information to Receiving Party.

(a) Relationships. Nothing contained in this Agreement shall be deemed to constitute either party a partner, joint venturer or employee of the other party for any purpose.

(c) Integration. This Agreement expresses the complete understanding of the parties with respect to the subject matter and supersedes all prior proposals, agreements, representations and understandings. This Agreement may not be amended except in a writing signed by both parties.

(d)    Waiver. The failure to exercise any right provided in this Agreement shall not be a waiver of prior or subsequent rights.

(e)     Attorney Fees and Expenses. In a dispute arising out of or related to this Agreement, the prevailing party shall have the right to collect from the other party its reasonable attorney fees and costs and necessary expenditures.

(g)     Successors & Assigns. This Agreement shall bind each party’s heirs, successors and assigns. Receiving Party may not assign or transfer its rights or obligations under this Agreement without the prior written consent of Disclosing Party. However, no consent is required for an assignment or transfer that occurs: (a) to an entity in which Receiving Party owns more than fifty percent of the assets; or (b) as part of a transfer of all or substantially all of the assets of Receiving Party to any party. Any assignment or transfer in violation of this section shall be void.

As noted, if you have disclosed your film concept without requiring secrecy, for example to actors, investors, or a producer, you will have a more difficult time enforcing this NDA. There are three other requirements to protect a film concept: your idea must be novel and original; your idea must have been solicited, and the purpose of disclosing your idea is to generate revenue. If you wish to use this NDA for some other audiovisual, substitute the type of media (TV Show, Documentary, Music Video, for the terms “Film” and “Film Concept.”

Below we provide an explanation for each of the provisions in the Film (Movie) Non-Disclosure Agreement.

Fill in your name or company name (you are the Disclosing Party).  Fill in the name of the Receiving Party. That’s the individual or company evaluating your film concept (for example, an investor or producer). Finally, fill in the date the agreement will take effect. This is often the date that the last party signs the agreement.

This clause identifies the film concept that is the subject of the transaction between the parties. Because film ideas are difficult to protect, this clause contains two statements that have been used successfully in disputes: that the ideas have been solicited and that the arrangement is for compensation.

This clause makes clear that your trade secrets must be kept in confidence by the receiving party and may not be revealed to others without your prior written consent.

This clause provides the receiving party with a termination date of the agreement. The Agreement should last as long as the information is likely to remain a secret. In the film industry, one or two years is a common period, but it can be much shorter, even as little as six months.

This clause makes clear that you are not granting any ownership rights in the film concept or the confidential informat­ion to the receiving party.

These miscellaneous provisions (sometimes referred to as “boilerplate”) are usually grouped together at the end of an agreement.

(a) Relationships. Most agreements include a provision like this one, disclaiming any relationship other than that defined in the agreement.

(c) Integration. The integration provision verifies that the version you are signing is the final version and that neither of you can rely on statements made in the past.

(d) Waiver. This provision states that even if you don’t promptly complain about a violation of the NDA, you still have the right to complain about it later.

(e) Attorney Fees and Expenses. If you don’t include an attorney fees clause in your agreement, a judge may (in most states) order the award of attorney fees in cases where the theft of the trade secret was willful and malicious. It’s up to the judge, which makes things unpredictable. You are far better off using an attorney fees provision. However, don’t be surprised if the other party is opposed to the idea. Why? Because it is the receiving party that is usually sued, not vice-versa, and the receiving party may believe that the provision will encourage you to litigate.

(f) Governing Law. You can choose any state’s laws to govern the agreement, though the most logical state for this provision is the state where the property is located.

(g) Successors and Assigns. This provision binds any company that acquires either party.

Signing the agreement. Someone with the necessary authority must sign the agreement on behalf of each party. Each party should sign two copies and keep one. This way, both parties have an original signed agreement. 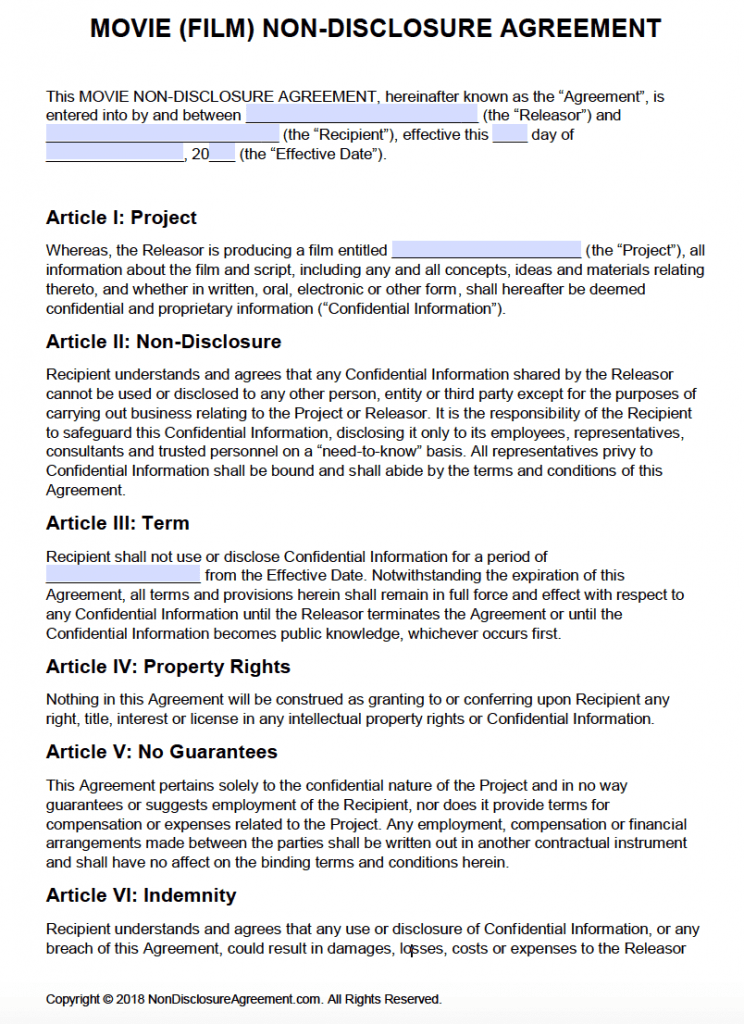