The process of trade secret litigation is complex, expensive, and ultimately depends on the case being filed. As you can see on the chart below, trade secret filings have skyrocketed, especially in the last 20 years. Which is most likely the reason for the federal government’s recent push to have all States (except New York and Massachusetts) to implement the Defend Trade Secrets Act (DTSA). 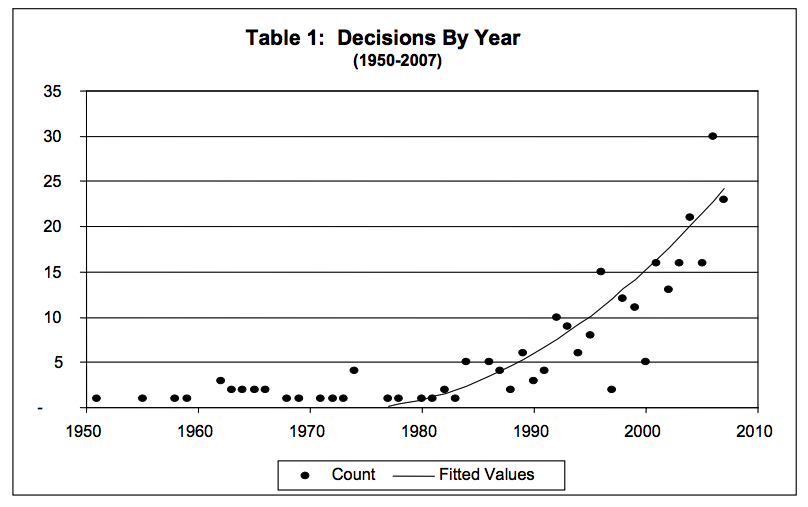 Step 1 – Deciding Who to Sue

Before filing a lawsuit, your attorney must determine who should be sued. The defendants include anyone who violated your NDA and those people or companies that didn’t sign NDAs but who improperly used or disclosed your trade secrets. For example, a company that encouraged an ex-employee to violate an NDA. 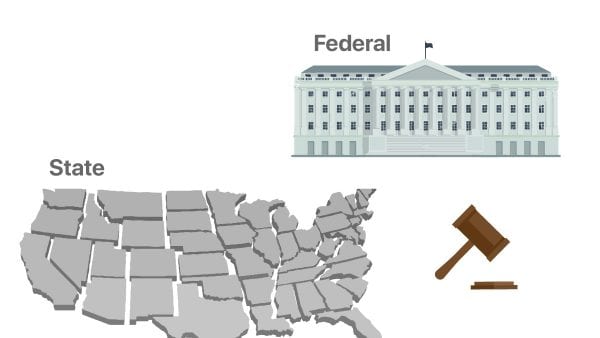 Your attorney must also determine which court is the proper one for the suit. A trade secret lawsuit may be brought in a state court or, in a federal district court under the provisions of the federal Defend Trade Secrets Act (DTSA). The DTSA, enacted in May 2016, provides some advantages over state laws based on the Uniform Trade Secrets Act. The final decision about whether to file in state or federal court should be made by your attorney, based upon tactical and geographic factors.

If the parties to a trade secret dispute are from different states, how do you know which state’s law is applied when resolving the dispute? The nondisclosure agreement may provide the answer. For example, your agreement may state the laws of a specific state shall govern the disputes. If so, that state’s laws will govern the litigation, regardless of where the parties are from or where the alleged breach of the NDA occurred. If the NDA doesn’t address this issue, then the court will determine which state’s law to apply. The decision may be based on factors such as the relationship of the parties, the residence of the disclosing party or the location of the trade secret loss.

Step 3 – Filing the Complaint and Serving the Summons

You initially file two documents in a lawsuit: a complaint and a summons. These documents must be delivered to the defendants following the court’s rules. The complaint sets forth the facts of the misappropriation and requests remedies such as compensation and injunctive relief. 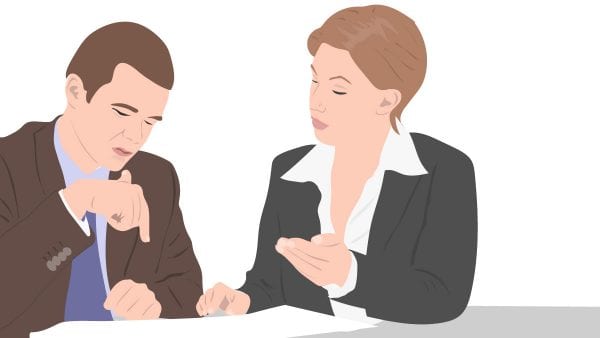 Our overburdened court system uses several methods to speed litigation. One is settlement conferences, in which the parties meet with the judge to hash out a resolution. In some courts, parties get an early neutral evaluation (ENE) in which a third party under the direction of a judge (usually an attorney experienced in trade secret law) evaluates the dispute and informs each party of the likely outcome.

Step 5 – Getting the Defendant’s Answer and Counterclaims 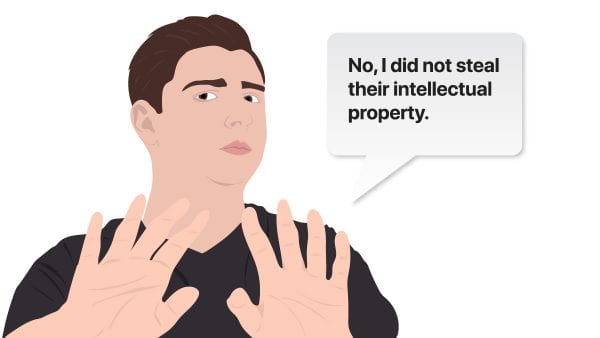 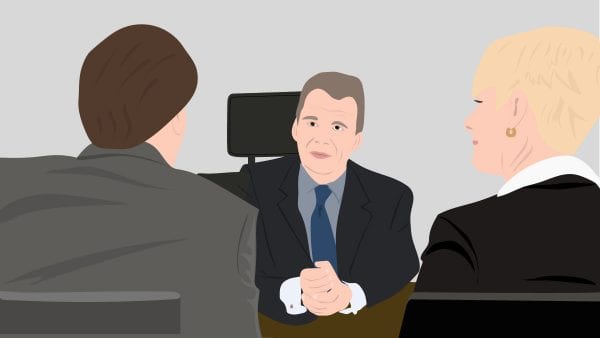 Discovery is a process by which each party to the litigation acquires information from the other (and third-party witnesses) before trial. You can request documents or send written questions to the other party. You can interview witnesses and parties under oath (depositions). Since your case may be technical and scientific, it may be necessary that experts testify on your behalf. Before trial, each side lists the expert witnesses it expects to call. Discovery is expensive-its cost often induces parties to settle lawsuits. 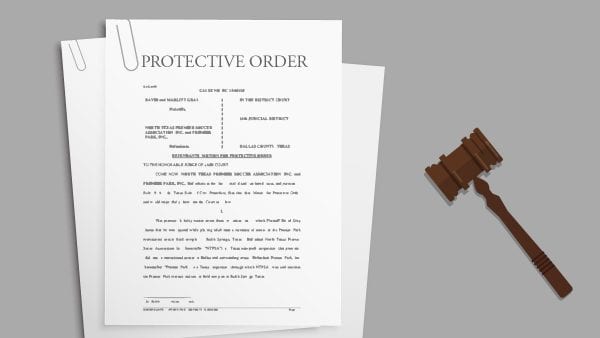 If one party requests trade secret information from you during discovery and the court decides failure to disclose it would cause injustice or conceal a fraud, you will be required to disclose it. In order to preserve secrecy, the court will issue a protective order. This order prohibits the participants in the lawsuit from disclosing the secret, and it “seals” the court record pertaining to the trade secret, making it unavailable as a public document. 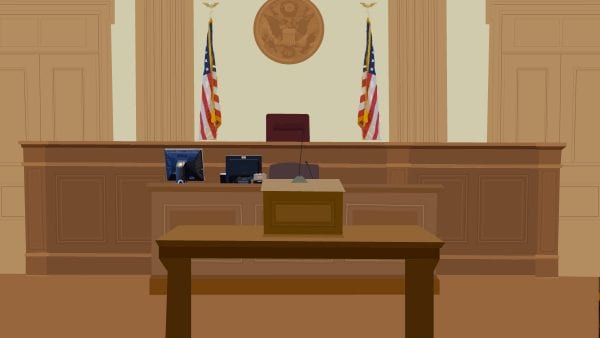 During the trial, you attempt to prove the elements of your case through witnesses or with physical evidence such as documents. The witnesses for each side are questioned by the side that called them and then cross-examined by attorneys for the opposing side. A trade secret lawsuit can be heard in front of a jury (if either party elects) or just in front of a judge. There are some issues that a jury is not permitted to decide. For example, a judge, not a jury will determine whether or not an NDA is valid. However, a jury can decide whether the NDA was breached and the extent of damages.

After the jury deliberates and issues a verdict, the verdict is confirmed by the judge and becomes a judgment that can be enforced by the winning party. On rare occasions, a judge who believes that the law and facts do not support the verdict will set aside or void the jury’s verdict.

Step 9 – Appealing to a Higher Court 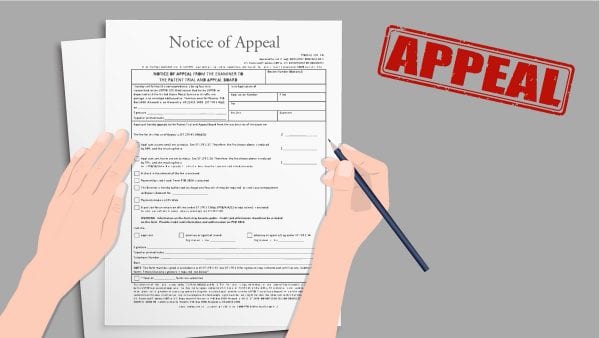 Either side can appeal the trial verdict. For example, you could appeal if you won the case but were unhappy with the amount in damages. In most states, and in federal courts, a three-member panel of judges will review the trial court transcript and related documents to determine whether or not a legal error occurred. If the parties are not satisfied with the appellate court determination, the only other recourse is to ask the state’s supreme court (or if appealing from a federal appellate court, the U.S. Supreme Court) to hear the case. Unlike other courts, those highest-level courts accept only the cases they feel are important.