License / Price: Free
Use this NDA to: inform a violator of a non-disclosure agreement that if they do not stop sharing information that legal action will take place.
13,756 Downloads

I am informed that [describe trade secret theft — for example, “Last year you hired an ex-employee of our company who was bound by a nondisclosure agreement. Soon after the hiring, your company began manufacturing and selling a cranberry-pineapple salsa sauce under the name “Too Hot to Handle,” that was identical in taste and formula to our company’s best-selling salsa sauce.”)] The purpose of this letter is to place you on notice regarding these claims and request that you cease any continuing or future uses of our trade secrets and that you compensate our company for any financial damages.

Absent a prompt resolution, I will recommend that my company take appropriate legal action to protect its proprietary rights. Any further infringing activity occurring after the receipt of this letter shall be considered a willful misappropriation. Naturally, it is in the best interest of both parties to avoid litigation. My company is prepared and willing to consider nonlitigious alternative dispute resolution procedures. I am hopeful that your reasonable investigation will result in a speedy resolution.
After you have reviewed this letter, please contact me.
Sincerely,

Below is a brief explanation of the cease and desist letter.

The first paragraph identifies the parties and informs the misappropriating party of the existence of the trade secret (without disclosing it).

The second paragraph describes the alleged misappropriation and demands it be stopped immediately. If the secret is being used in a commercial process or product, the letter requests a halt to any further commercialization of the product or process. It may also demand financial payment. Avoid making conclusory statements such as “You are misappropriating my secrets by selling these products.” Instead always couch your statements in terms such as “I am informed and I believe that your sale of these products misappropriates my trade secrets.”

The third paragraph encourages resolution. This letter does not take a hardball approach. It invites the infringer to resolve the dispute. Litigation is not threatened. The advantage is that it avoids a declaratory relief action (see below) and invites a nonlitigious resolution. The disadvantage is that since it is not threatening, the infringer may not take the letter as seriously.

You may get a letter back from the company, offering to discuss the issues or if the other company reasonably believes you’re going to sue it for misappropriation, it may instead bring a lawsuit asking for “declaratory relief.” It may ask the court to determine the validity of a nondisclosure agreement or of a trade secret and whether it has been misappropriated. However, if your letter did not threaten a lawsuit, but proposed resolving the dispute some other way — for example, by requesting arbitration or by granting a license — the company has no right to request declaratory judgment. 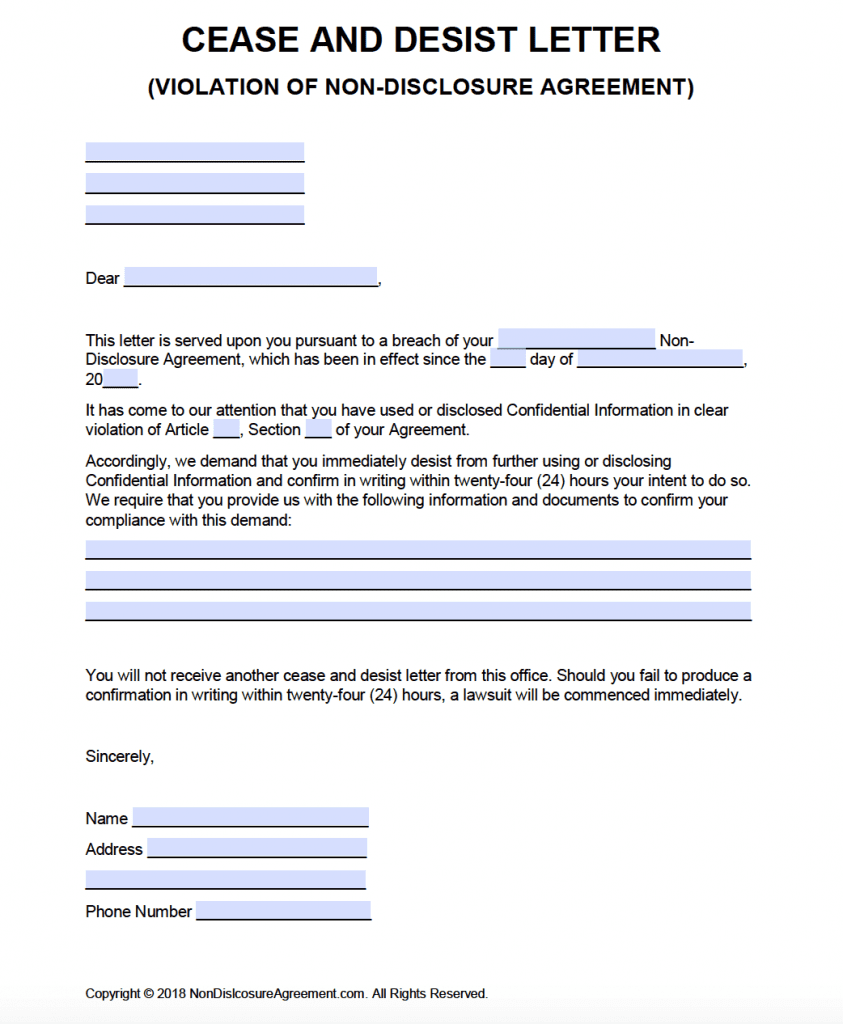