License / Price: Free
Use this NDA to: legally protect the proprietary information of your business from being used by an independent contractor that provides their services.
60,099 Downloads

Employee NDA – For businesses that want to protect their proprietary information from being released during or after an individual’s employment.

Upon Hiring Party’s request, Contractor shall immediately return all original materials provided by Hiring Party and any copies, notes or other documents in Contractor’s possession pertaining to Confidential Information.

7.    Notice of Immunity from Liability.

(a)    Relationships. Nothing contained in this Agreement shall be deemed to constitute either party a partner, joint venturer or employee of the other party for any purpose.

(c)    Integration. This Agreement expresses the complete understanding of the parties with respect to the subject matter and supersedes all prior proposals, agreements, representations, and understandings. This Agreement may not be amended except in a writing signed by both parties.

(d)   Waiver. The failure to exercise any right provided in this Agreement shall not be a waiver of prior or subsequent rights.

(e)    Injunctive Relief. Any misappropriation of Confidential Information in violation of this Agreement may cause Hiring Party irreparable harm, the amount of which may be difficult to ascertain, and therefore Contractor agrees that Hiring Party shall have the right to apply to a court of competent jurisdiction for an order enjoining any such further misappropriation and for such other relief as Hiring Party deems appropriate. This right of Hiring Party is to be in addition to the remedies otherwise available to Hiring Party.

(g)    Jurisdiction. The parties consent to the exclusive jurisdiction and venue of the federal and state courts located in _________________ in any action arising out of or relating to this Agreement. The parties waive any other venue to which either party might be entitled by domicile or otherwise.

(h)    Successors & Assigns. This Agreement shall bind each party’s heirs, successors and assigns. The contractor may not assign or transfer its rights or obligations under this Agreement without the prior written consent of Hiring Party. However, no consent is required f­or an assignment or transfer that occurs: (a) to an entity in which Contractor owns more than fifty percent of the assets; or (b) as part of a transfer of all or substantially all of the assets of Contractor to any party. Any assignment or transfer in violation of this section shall be void.

Below we provide an explanation for each of the provisions in the Independent Contractor Non-Disclosure Agreement.
Introductory Paragraph
Fill in the name or company name of the Hiring Party. That’s the party revealing financial information (that’s likely to be you, the person preparing this agreement). Fill in the name of the individual or company that will receive or have access to the financial information (the Contractor). Finally, fill in the date the agreement will take effect. This is often the date that the last party signs the agreement.

3.     Non-Disclosure
This clause makes clear that your trade secrets must be kept in confidence by the Contractor and may not be revealed to others without your prior written consent.

4.     Return of Materials
The Contractor promises to return materials that you provided. The agreement gives the Contractor 30 days to return the materials, but you can change this time period if you wish.

6.     Term
This clause provides the Contractor with an expiration date for the agreement. The Agreement should last as long as the information is likely to remain a trade secret. Five years is a common period, but it can be much shorter, even as little as six months.

7.      Notice of Immunity from Liability
Including this provision enables the hiring party to qualify for double damages and attorney fees under the federal Defend Trade Secrets Act.

8.     General Provisions
These miscellaneous provisions (sometimes referred to as “boilerplate”) are usually grouped together at the end of an agreement.
(a)    Relationships. Most agreements include a provision like this one, disclaiming any relationship other than that defined in the agreement.
(b)   Severability. The severability clause provides that if you wind up in a lawsuit over the agreement and a court rules that one part of the agreement is invalid, that part can be cut out and the rest of the agreement will remain valid.
(c)    Integration. The integration provision verifies that the version you are signing is the final version and that neither of you can rely on statements made in the past.
(d)   Waiver. This provision states that even if you don’t promptly complain about a violation of the NDA, you still have the right to complain about it later.
(e)    Injunctive Relief. An injunction is a court order directing a person to do (or stop doing) something. If someone violated your NDA, you would want a court order directing that person to stop using your secrets.
(f)    Governing Law. You can choose any state’s laws to govern the agreement, though the most logical state for this provision is the state where you (Hiring Party) are located.
(g)    Jurisdiction. The purpose of adding a jurisdiction provision to an NDA is to get each party to consent in advance to jurisdiction in one county or state and to give up the right to sue or be sued anywhere else. As with the previous provision, the most likely choice is the county and state in which you (Hiring Party) are located.
(h)     Successors and Assigns. This provision binds any company that acquires either party.
Signing the agreement. Someone with the necessary authority must sign the agreement on behalf of each party. Each party should sign two copies and keep one. This way, both parties have an original signed agreement. 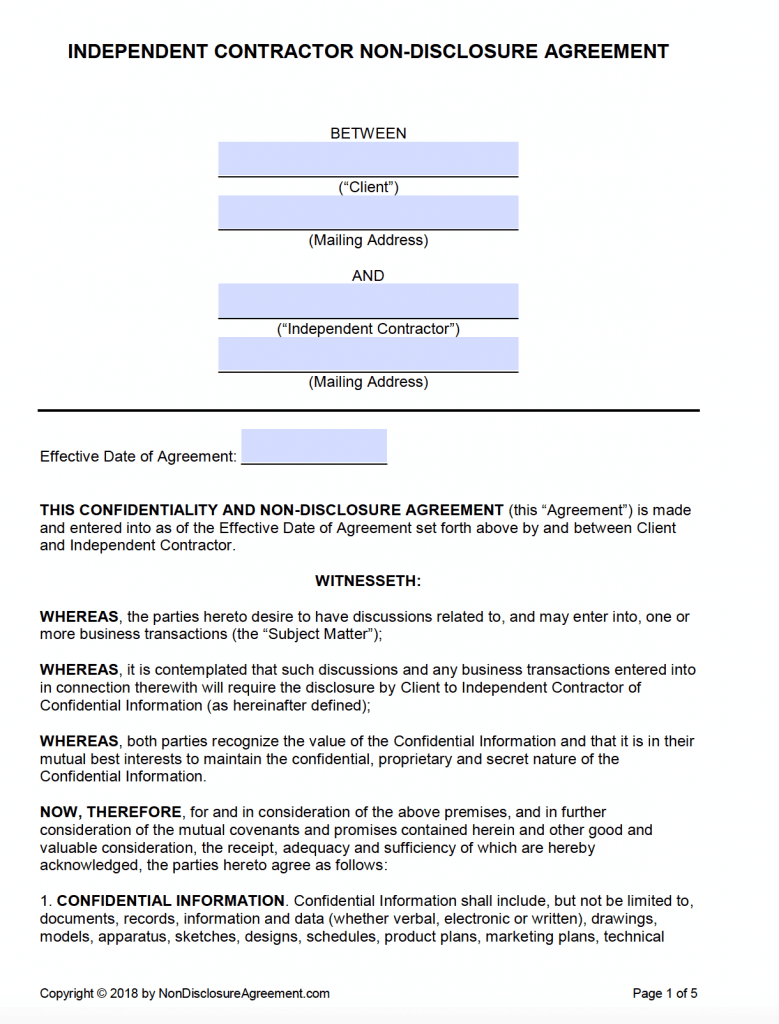